Life should be about experiences and that meant a mini jaunt up the road to our Nation’s Capital. Talia was on spring break, so I took some time so we could do some sight seeing. We spent less than 48 hours in one of the most visited cities in the world, but packed in quite a bit, including good eating.

After a minor hiccup delaying the start of our journey and some heavy traffic along the way, we finally arrived in Washington, DC around 2pm. We quickly checked into the Wardman Park Marriott, near Woodley Park, dropped off our bags and were out the door headed for the National Mall. We decided to brave the Metro for the first time in years… and after asking some questions found ourselves on the way to the Smithsonian stop. Although the weather was less than optimal… cloudy, misty and downright chilly… we were not going to be stopped.

Once we entered the Mall our tour took a westward direction… we walked around the Washington Monument and gazed at its incredible beauty. Unfortunately, the monument is closed to sightseers until spring of 2019 for repairs and modernization. I was in awe of this beautiful 555-foot granite structure. It’s hard to believe, but the Washington Monument was once the tallest building in the world. 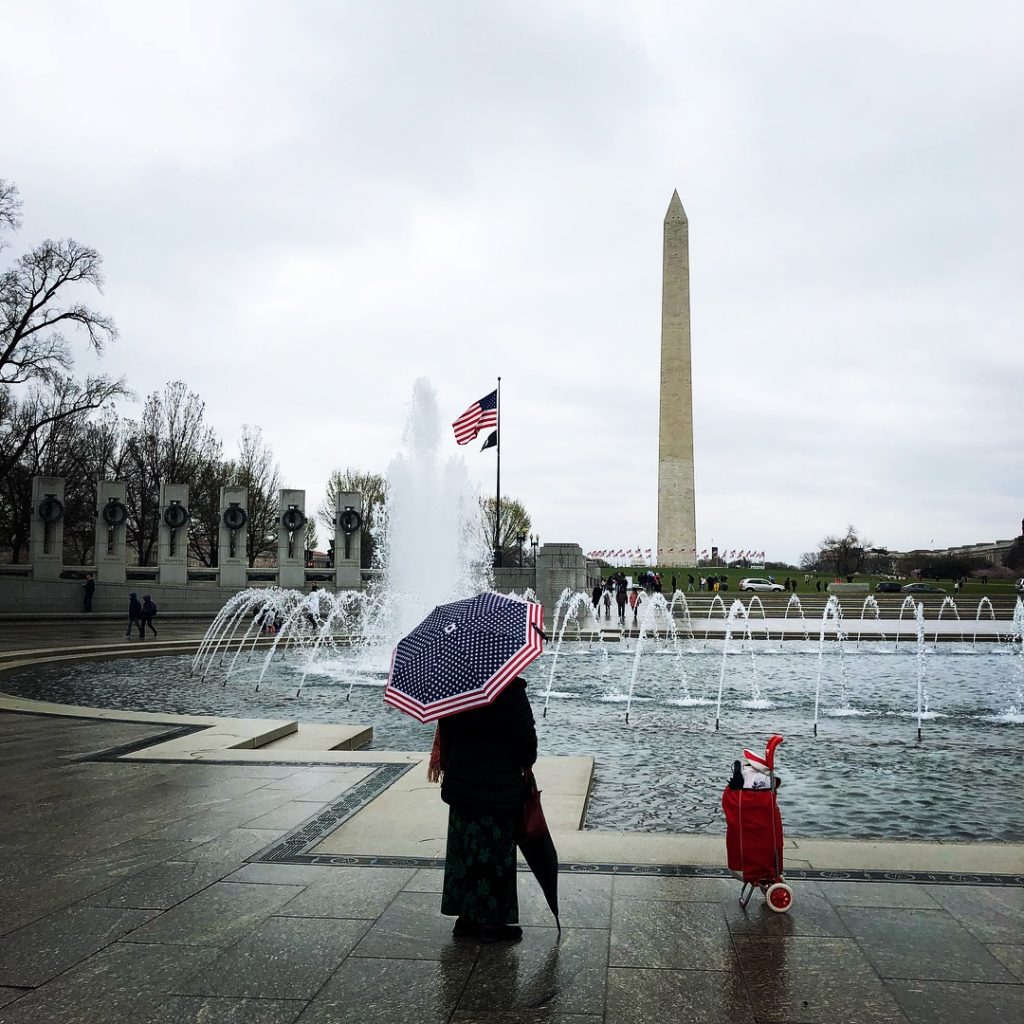 We then proceeded to the WWII Memorial, which was breathtaking. It truly grips your heart when you enter the memorial, which was built to honor the spirit, sacrifice, and commitment of the American people. When you stand in front of the Freedom Wall (which is part of the memorial) and realize each gold star represents the death of one hundred service personnel you truly understand the enormity of the war. There are 4,048 gold stars. 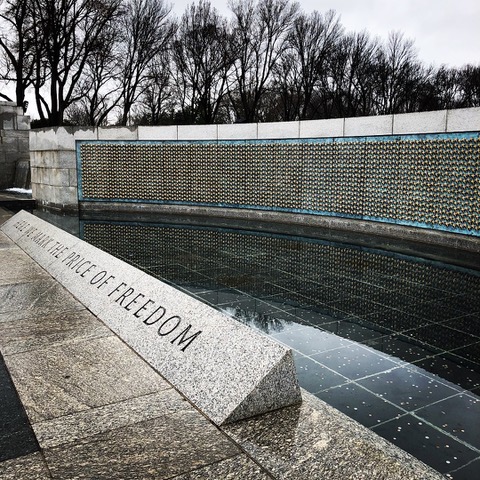 Our next stop was the Lincoln Memorial, which I have always loved. I stood there and stared at Honest Abe and reflected on what he said on a battlefield in Gettysburg in 1863 underneath an old oak tree, “…our fathers brought forth, on this continent, a new nation, conceived in liberty, and dedicated to the proposition that all men are created equal.” What brilliance in those words spoken 155 years ago! 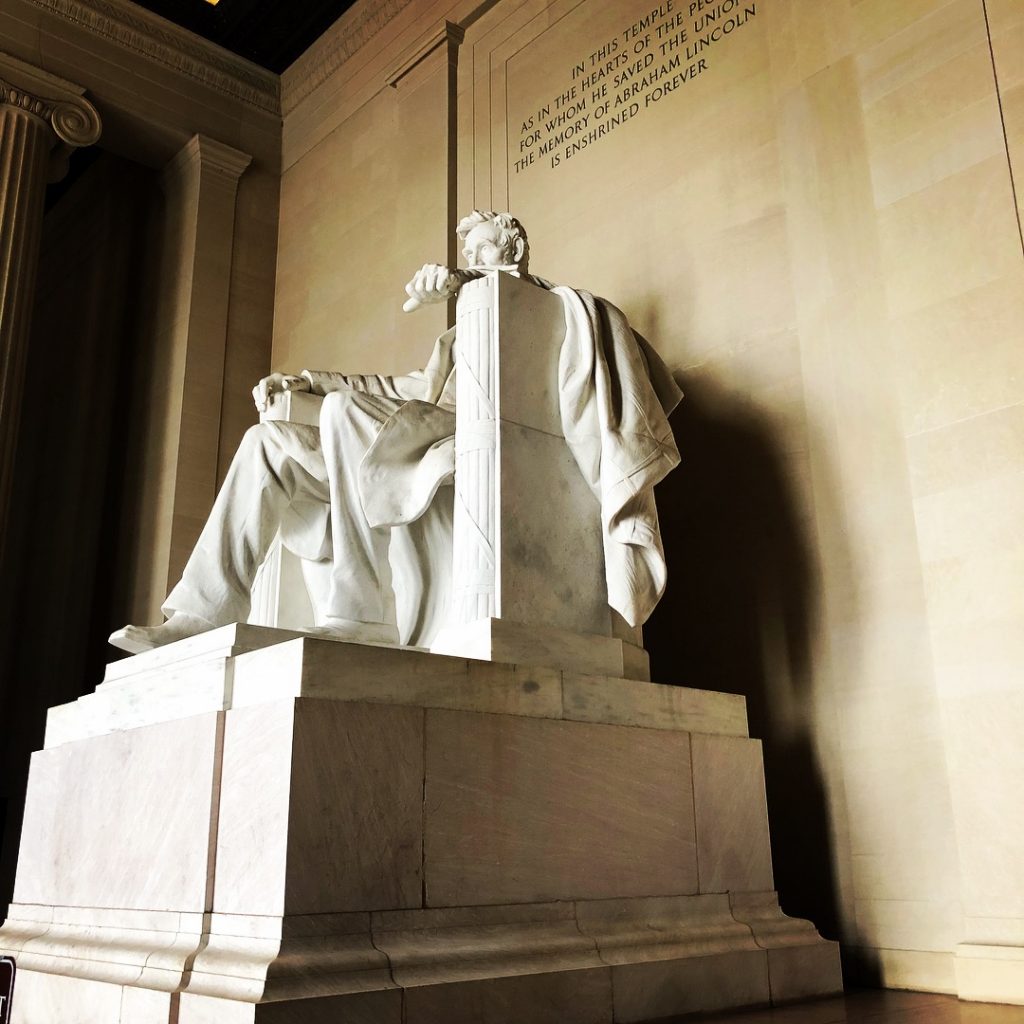 Staring from this monument across the Reflecting Pool you gaze across the mall past the Washington Monument to the United States Capital.

We then walked over to the Korean War Memorial, which honors those who died in the three-year conflict. This memorial seemed a bit eerie to me. The stainless steel statues of soldiers on patrol seemed so real; I felt as though I could hear their whispers or the cry’s of death as they walked through a field. Directly behind the statues is a mural wall with the faces of 2,400 unnamed soldiers who perished. 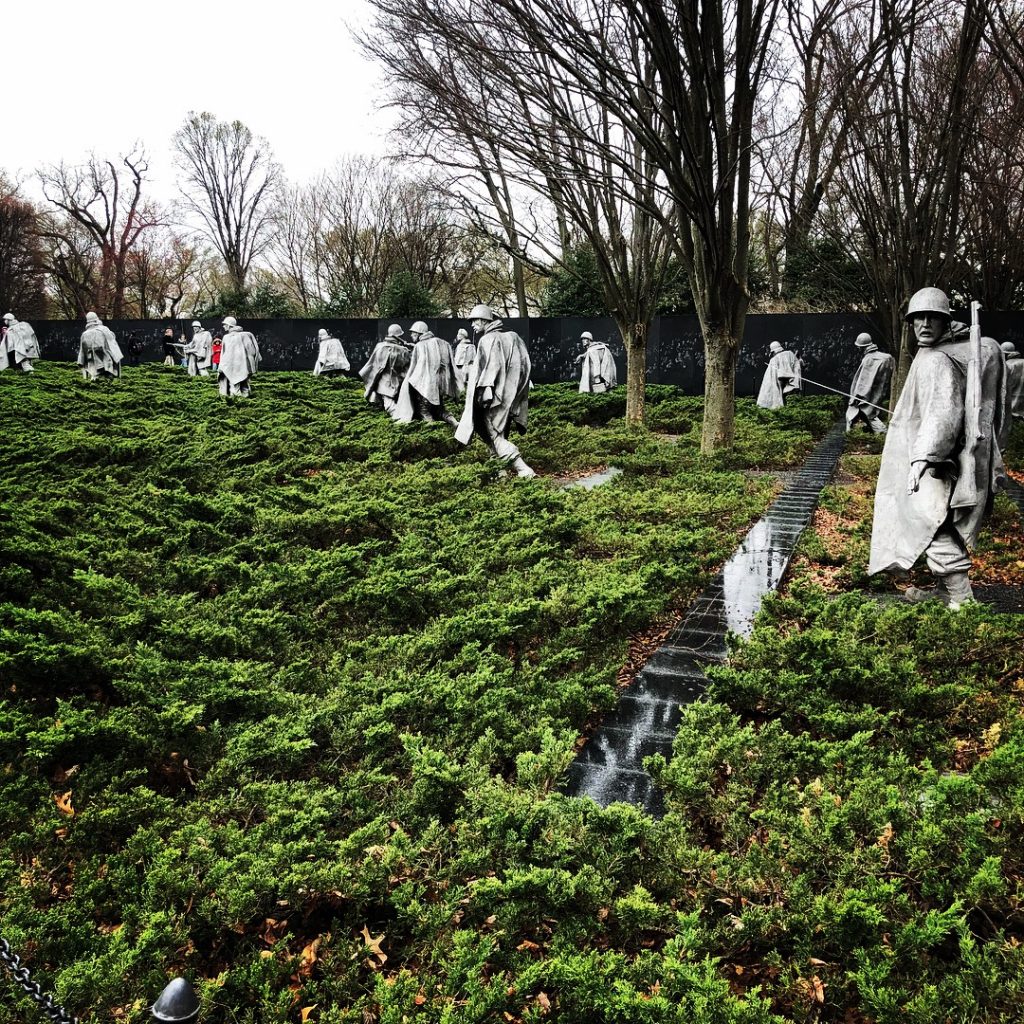 Talia and I then walked over to the Vietnam Veterans Memorial and quietly paid homage to the 58,220 Americans who died in this war. The black granite wall, which stands 10’ tall at its apex, is 493 feet long and is comprised of 144 panels. Each panel is etched in chronological order with the names of fallen soldiers. I walked away from this memorial somber, remembering that it was the devotion to the call to duty and country that took these young soldiers half way around the world.

Although Mike was too young to serve in this war, his dream from childhood was to serve in our military. His career in the Air Force stemmed 27 years and as a military wife, I fully understand the devotion to duty and country.

Remembering history is not always easy, but necessary. 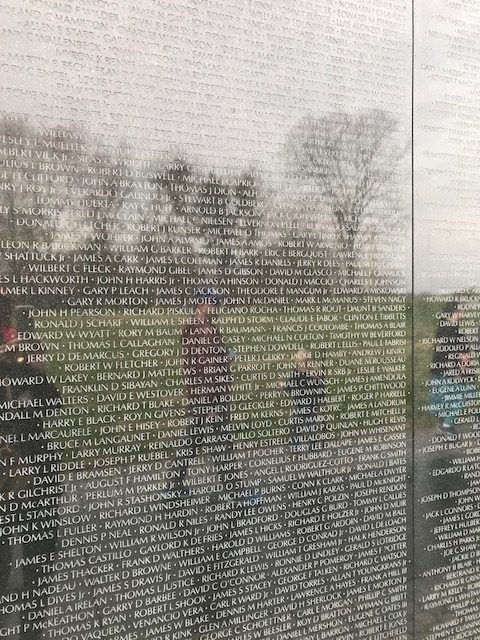 We then began our stroll over to the Jefferson Memorial, which was quite the hike, but taking in the cherry blossoms lightened our mood. We were fortunate our visit to DC coincided with the peak bloom of the cherry blossom trees. The depths of color of the pink blossom were spectacular and I was delighted that I finally had the opportunity to see the trees in full bloom. We couldn’t have planned this visit any better. 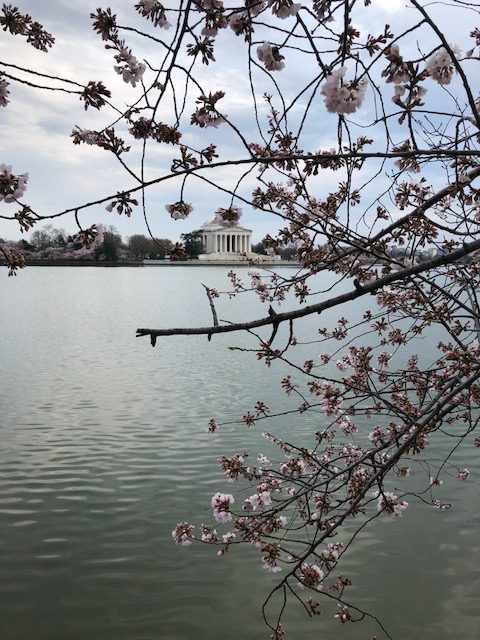 As the afternoon progressed into the early evening, the temperature started to drop. The damp coldness in the air brought a chill to my bones. I was wishing I had packed a heavier coat. At this point we only gazed across the Tidal Basin at the beauty of the Jefferson Memorial.

Heading back to the hotel we were excited about our dinner reservations at New Heights Restaurant on Calvert Street NW. It was an upscale restaurant that’s only open for dinner and serves new American fare. We started our meal with a toast to the day…I enjoyed a lovely glass of Aligote, Bouzeron, Domaine Chanzy Bourgogne FRA, which was a dry white wine recommended by our server. It went extremely well with my meal selection. Talia chose a crisp Rose from Spain called Tempranillo Rose, Baron De Ley, Reserve, 2015.

Our appetizers included mouth-watering Crispy Fried Oysters and a Black Trumpet Mushroom Crepe followed by what I called a basket of yumminess. It was a selection of breads to include an exceptionally moist cornbread, served with lime butter. I can still taste it. 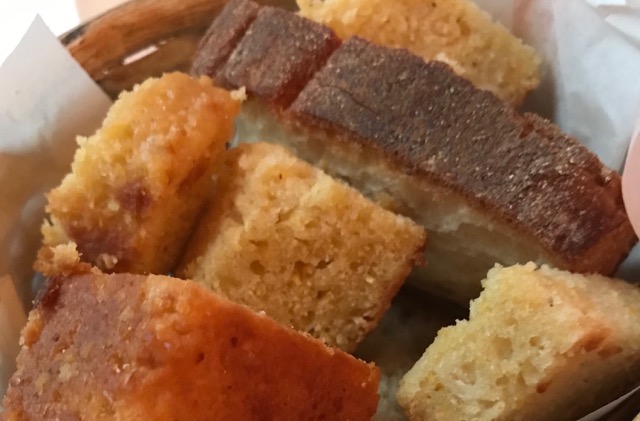 I chose a Pan Seared Branzino fish, which was flaky and tender and served over citrus black rice. It was beyond delicious. Talia selected the Line Caught Halibut served over green curry, baby seaweed, and pickled beets. It was perfectly broiled. According to Talia she would definitely eat it again.

We ended the meal by sharing a gin infused gelato, well actually we asked the server to surprise us. The combination of the gin with the sweetness of the cream blended well. It had the taste of a juniper berry.

We were both pleased with our food and the wonderful service. I would highly recommend this restaurant.

The next morning we started with breakfast at Stone’s Throw, the hotel restaurant. It was lovely and neither Talia nor I had any complaints, but both of us were eager to get started with our day of activities so we didn’t dally.

First on the agenda was a visit to the Smithsonian National Zoo, which was a mere three block walk from the hotel. What wonderful memories visiting the zoo brought back. I remember when we took the girls there for the very first time. We were novices at driving in the city and completely missed the parking entrance. It took us an hour to get turned around. Life before GPS! But that wonderful day was still fun-filled and time well spent together as a family. Talia’s and my visit was much shorter this time, but we still enjoyed seeing the animals… I guess you can say we’ll always be a kid at heart. We saw bison, tigers, lions, bears, apes, orangutans, and elephants. 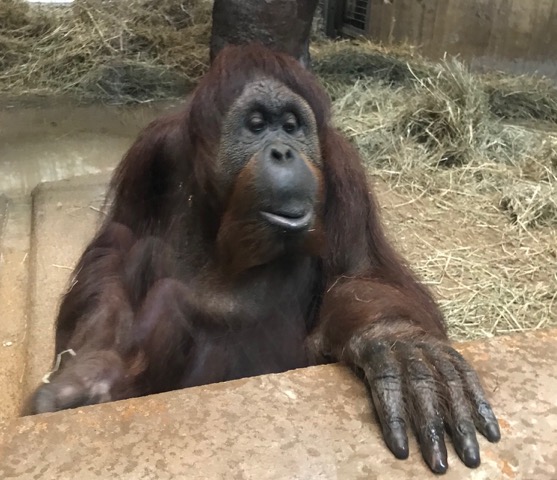 We left the zoo and headed to meet my dear friend, Claudia, for lunch at Umi Japanese Cuisine located on Connecticut Ave NW. All I can say is lunch was delicious. We started the meal with steamed Edamane and Gyoza, which I have to say, was the best-pan fried pork dumpling I have ever had. Talia and I then ordered a sushi roll called an Angry Dragon Roll (which I highly recommend) and it did not disappoint. Claudia selected a Sushi and Sashimi lunch, which she loved as well.

Following lunch we decided to tour the Washington National Cathedral, which received extensive damage from a 5.8 magnitude earthquake in 2011. Although the cathedral’s interior is completely repaired, the damage to the exterior will take another 10 years to restore. The Cathedral Church of Saint Peter and Saint Paul in the City and Diocese of Washington, commonly known as Washington National Cathedral, is a cathedral of the Episcopal Church and welcoming to all. The Neo-Gothic design structures beauty and magnificence brought tears to my eyes as I thought about the first foundation stone, which came from a field near Bethlehem, being set into a larger piece of American granite and laid in 1907. Such history. 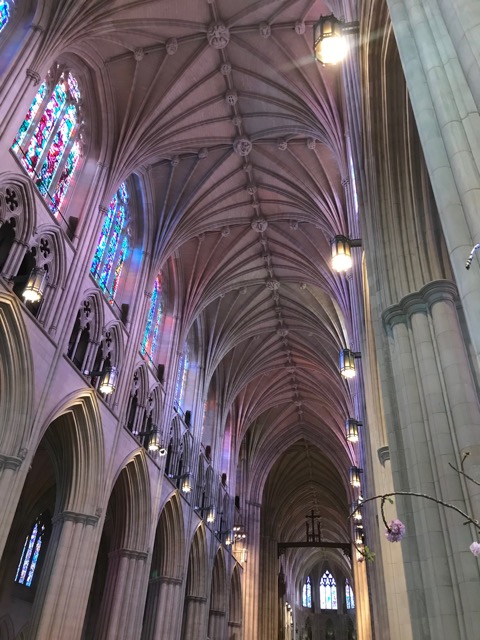 Talia and I ended the day by going to Georgetown where we waited in line for 45 minutes at Georgetown Cupcake. I guess the saying applies…when in Rome do as the Romans do. It was worth the wait and I would do it again. The six cupcakes we purchased were delicious.

We then spent the rest of the evening wandering and window-shopping through Georgetown. I love the charm of this area…from the federal-style architecture to the cobblestone streets to all the shopping it has to offer. We ate a lovely Beet and Goat Cheese salad at the original Sweetgreen as we were tired and our feet hurt (we both wore the wrong shoes) and were ready for the trip home. Luckily we missed the rush hour traffic and were home within two and a half hours…where we gleefully opened the box of cupcakes and divided each into thirds and enjoyed them with Mike. 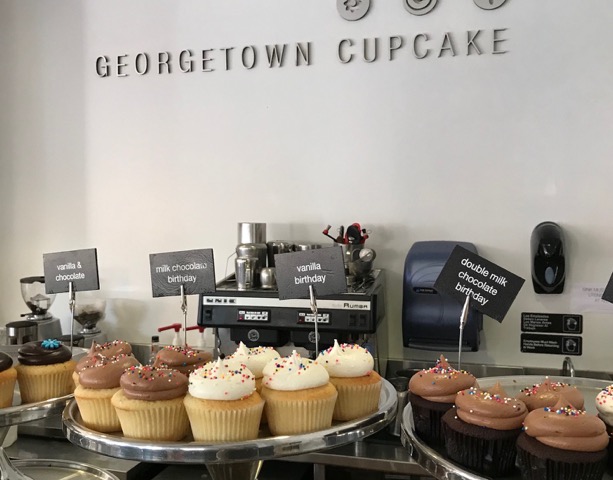 This was a short trip, but it was lots of fun and memories were made. Thanks Talia for being my travel partner. Life is about experiences and we certainly experienced a lot. Here’s to finding your experience. Enjoy!

Thanks Talia for sharing your photos.