Four years ago, Talia and I embarked on a European journey through the Mediterranean. Part of our journey included three Greek Islands: Corfu, Santorini, and Mykonos. It seemed our sole mission was to experience tzatziki at each island and that we did. Each island had its own take on the yogurt-based dip, but each one left us completely and utterly satisfied. 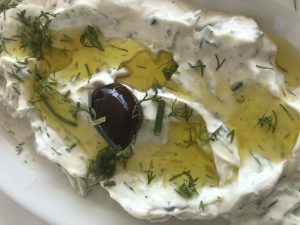 The above picture is of tzatziki we enjoyed in a restaurant in Santorini.

The first step to making tzatziki…take the time to make it in advance to allow the flavors to marry. 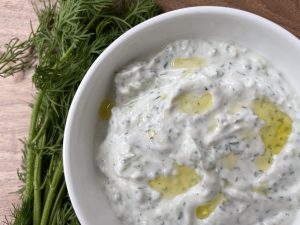 Here’s what you will need:

Now on to the curried cauliflower…

This next step requires careful execution when cutting the cauliflower into steaks…once you have removed the green leaves and evened out the core, your first cut will be down the middle of the cauliflower. Then take each half and cut from the middle a slice that is anywhere from a 1” to a 1 ½’ wide. You will then do that with the other half. The remaining cauliflower can be cut into florets. The rest of the recipe is easy…mixing the curry mixture and then brushing it on all pieces. 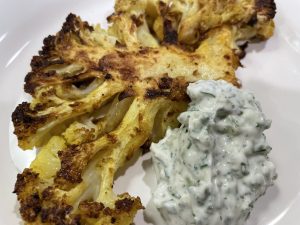 Here’s is what you will need:

This recipe is slightly modified from the recipe found in the Eatingwell issue. 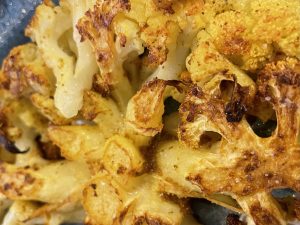 I have made this simple dish countless times in my kitchen and it never fails to satisfy.

From my kitchen to yours…enjoy and bon appétit